While many Americans are focused on a certain election this November, MBA admissions officers all around the world are counting down to a different kind of election.

Whether your next intake of students is coming up in just a few months or next autumn, it’s important to remember that MBA prospective students cast their votes every day of the year. How can you influence MBA candidates to elect your business school?

Here are five lessons from the home stretch of the 2012 presidential campaign trail to optimize your business school marketing strategy.

There are 50 states in the Union, but in these last few months of the presidential election, the two contenders are focusing their efforts on the handful of swing states that will decide the election -- just count the amount of rallies and bus tours that being held in Ohio, Florida, and Virginia. With only 24 hours in the day and a finite amount of time, it is critical to campaign where the deciding votes are.

Likewise, many full-time MBA programs receive applications from all over the world, but some prospects will provide a better return on investment. For optimal use of time and resources, analyze your acceptance yields by country or region to determine where to spend your time and energy on recruitment fairs, advertising, and communications.  Identify and nurture the strongest candidates who are most likely to accept this admissions cycle. Keep the developing and longer-term candidates in the pipeline for future years.

Many pundits see the upcoming debates as one of the last possible game changers for this election. As a result, it has been widely reported that both candidates are preparing intensely. While Jim Lehrer is probably not going to show up to moderate your next MBA information session, there is an important take away from the upcoming debate showdown in Denver... Be prepared.

Many candidates are shopping around and will have probing questions. You know the content of your presentation better than anyone else, but look at it from the outside from a prospective student's point of view. What questions would you raise? What is the perception of your program relative to the competition? This holds true for candidate interviews, too. For example, a prospective student once asked me why our program was ranked at a certain position relative to our nearest competitor. Practice for anticipated questions so that you not only have an answer, but you can also provide a compelling argument that provides an another perspective. Be ready whether it's for a one-on-one meeting or an entire room full of prospective students.

It was widely agreed that Bill Clinton, the 42nd President of the United States, delivered one of the most substantive speeches of both conventions due to his ability to make a strong argument. High praise even came from a GOP strategist who acknowledged that Clinton’s speech “tilted the scale.” Commentators on both sides complimented the specificity and delivery, including a prominent Fox News analyst who opined that nobody “can frame an argument more effectively than (Bill Clinton) can.”

Like a party convention, an information session is a key opportunity to influence constituents. While we call them "information sessions," consider these ubiquitous recruiting events as influential sessions as well. While candidates are seeking information – “the nuts and bolts” of program curriculum and the admissions process – they are also an important opportunity to convince prospects that your business school provides the best value proposition.

One of the most effective strategies at both conventions was the personal storytelling. Whether it was First Lady Michelle Obama at the Democratic National Convention (DNC) or Ann Romney at the Republican National Convention (RNC), each made an attempt to connect with coveted female voters by sharing their biographies.

Take a page from their playbook at your next information session. Make a connection with prospects by mentioning however briefly your own story. If you have your MBA or another graduate degree, explain your journey to show prospects you understand and can relate to their position. Have a personal conversation with your “voters” to humanize your business school.

Additionally, it does not hurt to consider staging. Think about the theatrics of the conventions with the RNC’s wood-paneled frames and modern LED screens. Even the First Lady’s nail polish color became the talk of the town (Artistic Nail Design). Are the “set designs” in your information sessions highlighting the vibrancy of your programs and capturing the attention of your audience?

Also, be sure to integrate innovative and creative content in your information sessions.  According to a former advisor to Presidents Reagan and Clinton, one of the missed opportunities at the RNC was the timing of testimonials from church members about Romney’s attentiveness during a family crisis. These moving testimonials along with a 10-minute heartfelt video about the candidate’s life were not shown in prime time. Be sure to feature testimonials from persuaders in your “prime time” space – during information sessions and on your website. Have them talk about how your program helped them overcome challenges and realize their dreams. It will create a powerful emotional pitch that resonates with candidates and moves them closer to you. 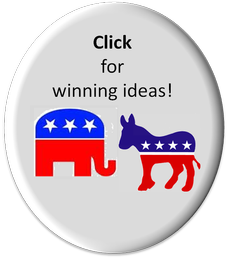 Barbara Coward, author of this article, is a marketing communications consultant at Percept Research. Barbara welcomes your questions and comments.